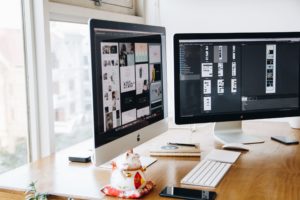 We’ve all seen people with two monitors joined to provide a contiguous desktop image.  Many of us assume that those setups exist for specialized work only, or that the user is a real techie.

Anyone who has ever worked with an additional display, however, loves the extra desktop real estate. All that space helps with everything from accounting to document work to data entry.

The screen size we’re used to tends to box us in.  We struggle when attempting to find the right window in all the layers, or to fit two windows next to each other.  Even Alt-Tab leads to some serious sifting as we look for our programs.

Clicking through stacked applications over and over again eats up time and stretches patience thin. Dual screens eliminate this issue for the most part, allowing more efficient work.

Software developer Mavenlink performed a study that showed people spending approximately an hour out of every work day switching between different apps. Time is money and that’s expensive

How much can using a second monitor improve efficiency? More than most people realize.

Jon Peddie Research studied the benefits of connecting two screens to a desktop computer or laptop over a period of several years. They found that over all types of jobs, employees improved productivity by an average of 42%.

From three studies conducted over the span of 15 years, they also discovered that between 2002 and 2017, use of two monitors spiked dramatically, showing a compound annual growth rate of 10%.

What Are the Benefits of Adding a 2nd Screen?

Do More With Less Time

Using a second monitor means that team members can do more effective work in less time when not fighting to get windows they need when they need to switch.

An additional monitor allows keeping programs such as email always open on one screen while working with other programs in the second screen.  Work progresses more fluidly, allowing us to get to all our programs when required.

Portable laptops represent the entire point of having a laptop. A multitude of people today transport their laptops everywhere, from home to work to cafes. However, the more portable the laptop is, the smaller the screen space.

One big drawback of using a laptop is that they will have a smaller monitor. There is also the difficulty in positioning. When using them on a desk, people will often try to prop them up, but the person is still staring down at the screen in most cases.

All laptops will feature smaller monitors than desktop computers.  Positioning also presents difficulties, considering that most workers can’t prop them up enough for level viewing. Everybody has to look down at their laptops.

Many remain unaware that laptops hook up to larger monitors well.  Doing so significantly improves the working experience and reduces tension.  Users can choose between mirroring the laptop screen to the monitor or using both screens together.

Multiple tasks require working with data in two different windows.  Editing and comparing a finished design with original instructions, or working up a PowerPoint presentation from notes represent two possibilities for these kinds of tasks.

Working with two side by side windows on a single screen provides less than optimal working conditions.  It’s frustrating to spend effort getting windows lined up just so, only to have it all blown away when scrolling.

When using two monitors, we have the desktop real estate to fully open both windows right next to each other without having to spend time on arranging them.

Ever been screen sharing on a video call while needing to check an email or review notes? When everyone can see your screen, that can get difficult or uncomfortable. Team mates often “sanitize” our screens (such as turning off alerts, etc.) prior to going into a meeting so nothing that should not appear is popping up.

When using dual screens, choosing which screen we want to share during meetings becomes an option. We can still have apps open on the other screen that are not part of the share.  Checking emails or using a messenger app while sharing your screen becomes possible.

Monitors are between $125-$250 on average.  Second monitors boost productivity by 42% on average.  That’s a nice ROI when talking about getting the best bang for our buck.

Another nice thing about adding a second monitor is no learning curve.  Plug the new monitor in, have IT set the PC to use both of them, and the rest is intuitive. Users don’t even have to think about learning how to drag icons from one screen to another, they just do it.

We provide these articles to our clients and readers because your success is our success.  We’re a company that creates and provisions custom business telephone systems using the Internet, and we’re good at it. We don’t sell IT services, but we do provide the best tips and tricks we can.  To get them delivered to your inbox once a month, sign up here for our newsletter.

If you want to boost your company’s productivity with our top of the line communication systems, contact us here or call today at 866-550-0005!